Other guys had models in swimsuits. Or movie posters featuring leather-clad actresses flashing “come hither” looks with their wild eyes. But not me. I had more important priorities for my wall space.

I started collecting books before I can even remember. My family had loads of old books passed on from older generations, and I was more than happy to hoard them like a dragon hovering over his pile of gold coins. I always made sure to keep them neatly arranged, and I didn’t like people touching the antiques. (These books were old.)

I eventually noticed that the other kids my age weren’t curating their own libraries, and I pitied them. I wondered how they spent all of their free time.

So there wasn’t room for cheap posters of nude-ish ladies posing in front of Italian cars, but I did make space for one picture. One woman’s face looked out over the placid study, someone who I would always admire. 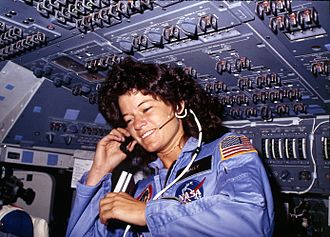 While working on master’s degree, I had the privilege of hearing Sally Ride give a lecture. Sort of. Well, what really happened is I walked outside the library and noticed a crowd of preteen girls gathered around a stage, and suddenly I remembered a poster in the hallway telling us about Sally Ride’s visit to campus. I tried not to look too eager as I rushed to join the kids.

I probably looked silly since a 6″6′, 200 pound bearded guy sort of stands out in a crowd of giggling girls. I slowed down as I got close and tried to look normal, a trick I have not mastered any more than when I was a child. It’s cool. I’m cool. Just Sally Ride, the only woman cool enough for my room. No big deal.

As Ride spoke, I noticed another man standing beside me and, if you can believe it, he was even bigger than me. I leaned his way. “Did you know she invented the robot arm the space shuttle uses?” I whispered. He nodded and tried to suppress a grin. “Yeah. I knew that.” Another geek.

I could have chosen any astronaut to be enamored with, but Ride really defied people’s expectations. That’s the sort of thing you latch on to when you’re the weird kid in school who’s always told you’re doing things wrong. Maybe it’s because you hate sports. Or because you like quiet walks and reading antique books. It’s just no fun being the kid who’s always strange.

But people like Sally Ride remind us that it’s okay to be the different one. It’s even okay to be outstanding.