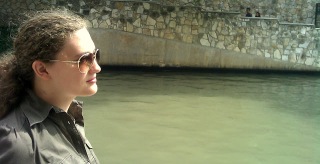 A few weeks ago, the wife and I traveled to San Antonio, TX to attend an academic conference on pop-culture (the PCA/ACA conference) that was held right on the beautiful Riverwalk.  It was a good conference and a very interesting trip.  Although, the conference was mostly about nerdy counter-cultural trends rather than popular media.  Shouldn’t we have been discussing The King’s Speech rather than obscure films from the 70s that are hardly known?  Well, that’s what happens when you let a bunch of nerdy academics talk about pop-culture – a subject geeks like me know nothing about.  There was even a moment when fans of Buffy: The Vampire Slayer criticized the Twilight fans for preferring a supposedly inferior teenaged vampire love story.  These people were experts on pop-culture?  Of course, there were some excellent scholarly panels on pop-culture subjects, but I kept on thinking that half of the presenters thought they were at a sci-fi convention.  Oh, well.  It was still a neat weekend. 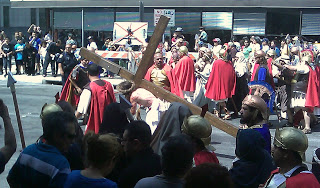 It was Easter weekend, and while we were having lunch the local Corpus Christ parade came by.  It is a re-enactment of Jesus’ passion with a local group of actors portraying the scene through the city streets.  Our taco restaurant just happened to have a perfect view. 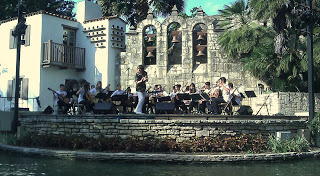 At the outdoor amphitheater we sat and watched a German guitar orchestra play classical and popular music.  The conductor talked to the boats that went by and made a lot of jokes. 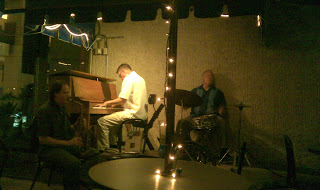 A really good jazz band on the Riverwalk (in really bad lighting).  Listening to this sort of music on a cool night by the water is exactly why people keep coming to San Antonio. 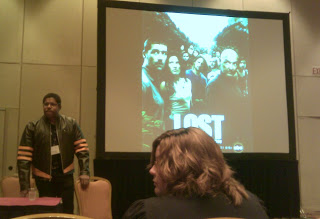 The first panel I attended was a discussion of LOST’s final season.  It was led by palywright/professor Thomas Parham, and his thoughts on the last season were quite similar to my own.  (Long story short – it’s bad storytelling to start with one story and end with another.) 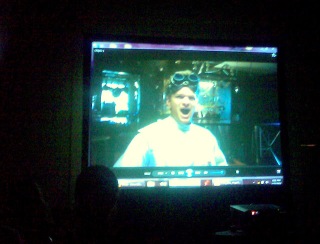 There was a sing-along of Whedon’s Dr. Horrible film.  I didn’t go because that would be really dorky.  How did I get the picture?  Well, uh, you see…oh, all right, Columbo, you got me.  How can I resist singing along with Captain Hammer? 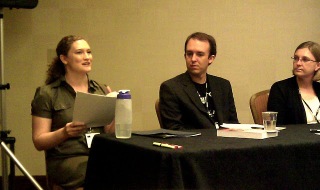 My wife discussed Bob Dylan in a panel about folk music.  Of all the panels I attended it was the one that would most easily fit in at another scholastic conference because of the quality of the research that went into each paper.  (As opposed to hearing people say, “I watched every episode of Angel and noticed that my favorite characters are like other characters in books.”) 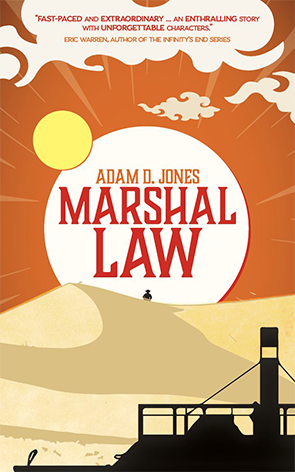